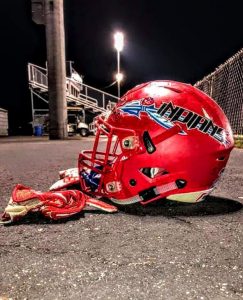 BY RICK REED
News-Gazette Sports Editor
LIBERTY – Union City traveled to Union County on Friday night with 15 players in uniform. Two are freshmen, one was injured. Ten of 11 players played on both offense and defense, as well as special teams.
Union County, with more than 30 players dressed, entered the contest winners of four of five games and had scored 130 points in five games. The high-scoring Patriots scored 53 points this season against Northeastern and 40 against Hagerstown.
Patriot quarterback Zach Hill stands 6-foot-2, weighing in at 231 lbs. Senior running back Mason Wicker had amassed 600 yards and scored six touchdowns so far this season.
The odds appeared overloaded in favor of the home Patriots.
But they were prepared for Union City’s determined defense. They didn’t have a player with a leg like Blayne Daniels. They couldn’t match the heart of the boys from the Hub City.
When the final horn sounded, the Indians had captured a 9-7 victory, thanks to some great defense and a 30-yard field game-winning field goal by Daniels.
“Our guys definitely played hard,” Union City coach Keith Maloy said. “We were able to stifle them with some great defense and we were able to force a couple of turnovers.”
A year ago, the Indians won five contests, one by a single point, three others by two points, and another by just six points. In the two wins this years, the Indians beat Hagerstown by seven points and Union County on Friday by two points.
“We’re not going to blow anybody out,” admits Maloy. “We just don’t have the type of team that’s going to do that. But we can win ball games if we go out and execute the game plan and make plays when we need to.”
The Patriots scored a touchdown in the first quarter on a long run to take a 7-0 lead, and that’s the way the scoreboard remained until the third quarter.
The Indians scored a touchdown midway through the third quarter, and with about two minutes left in the quarter, Daniels kicked a field goal through the uprights to put the Indians ahead 9-7.
“Blayne is a huge weapon for us, there is no doubt about it,” Maloy said.
Big plays on defense helped keep the Patriots off the scoreboard. Brenden Wright had a fumble recovery and Gabe Addington recorded his third interception of the year.
Defensive tackle Elijah Cowper was awarded game ball honors for his strong play on defense. Maloy also cited some outstanding play by inside linebacker Hunter Clay.
The Indians (2-3) return to action Friday when they travel to Cambridge City Lincoln (1-2).
Nov
28