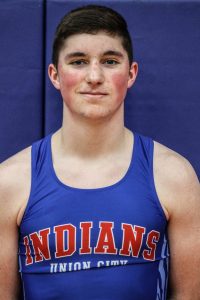 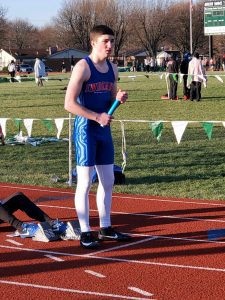 This weeks Star 98.3 Athlete of the Week has been announced. The award goes to Freshman Alec Spence.

Coach Daniels had this to say regarding Alec.

“I would like to nominate Union City Freshman Alec Spence for his performances over the last couple of weeks for the Union City Boys Track Team. Alec has been a huge force in the Indians success in the 4×100 and 4×400 relay teams as well as in the 200m dash.
Since the season began Alec has taken off over a second on his 200m time and at times has been willing to run the 400m dash to help the Indians during meets this year.
Alec had first place finishes in the 200m dash at the Wapahani Quad and Ansonia Ohio Quad meets and a solid 4th place finish at the Randolph Southern small school invite.
Alec has also helped the Indians 4×400 team with 2 first place finishes as well as 3 first place finishes in the 4×100 this year.
Alec’s current best times are:
100m dash: 12.05
200m dash: 24.70
400m dash split: 57.3
Alec is always one that is willing to do whatever it takes to help the team win or achieve the best time that they can. Alec is also the definition of Student Athlete as he maintains good grades in school and is someone that all of the younger kids look up to.
I nominate Alec because of his hard work to better himself and his dedication to make the team better each meet. “

This award is awarded each week in Randolph and Wayne Counties and is sponsored by Wetzel Auto, AK AWARDS in Richmond and Radio Stations WKBV (1490AM/100.9FM, Richmond), G1013FM (Richmond) and Star 98.3 WZZY (Winchester)

Union City would like to thank Star 98 radio for sponsoring this program in Randolph County. 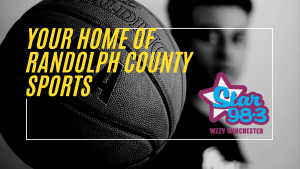